Alicia photographed for The Guardian

I have just added a beautiful snapshot of Alicia, photographed by Pal Hansen for the Observer New Review (The Guardian) to the photo gallery. In her interview, Alicia opens up on her new-found fame, the awards season, feminism and her favourite actresses growing up. Check out the picture in our photo gallery, and continue reading as you will find part of her interview below. 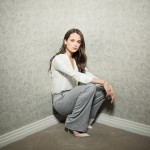 “It’s a coincidence, really,” she says. “All these films that I shot at different times over three years simply all arrived together this year. Remember when Jessica Chastain was suddenly in so many films at once? I suppose it’s like that. I hope so, because she’s incredible.”

[About her apartment in North-London] “It took me two-and-a-half years of living here with just three bags, but it has just about started to feel like home.”

“Up until 18 months ago, I thought the term ‘awards season’ was a kind of joke,” she says. “I had never really reflected that a certain kind of serious film came out later in the year. I just thought fall seemed like a good time to go to the movies. It’s colder, after all.”

“This worldwide spread of recognition is insane,” she murmurs. “I was brought up in a small country. If you made a Swedish film that just got into a film festival somewhere, that was like the biggest thing you could wish for.”

[About ‘The Danish Girl’] “It’s about them going through a transition, not just him,” says Vikander, who was greatly moved by Gerda’s split impulse between supporting her husband’s wish to be his true self and mourning the loss of a lover. “In any relationship, when you go through any big change, you struggle to find your new constellation, your new ground. It takes a while to determine what the new relationship between you is. I could relate to that. That got to me immediately.”

“Three trans women came up to me separately to tell me they had felt such a connection with Ava in Ex Machina, and her dream of finally coming to full female fruition,” she remembers. “They had all cried; one said she was very emotional during the scene where Ava finally puts her skin on for the first time. I hadn’t really made that connection, yet that was very much what I felt when I did that scene. That longing.”

“I vividly remember watching women in films when I was nine or 10, picturing them being what I’d be like as an adult. I had these real female crushes on certain actresses. And I’d watch them thinking, one day I’ll be that. One day I’ll be a woman. It’s obviously not the same, but I get that wish to find your complete form.”

“Helena Bonham Carter was one of my biggest crushes. And Rachel Weisz. I think I told her that when we were filming, which was probably a bit embarrassing.”

[About ‘Tulip Fever’] “Of course I’ve had a run of great opportunities and characters to play, but I was shooting this scene with Holliday Grainger that just felt like something new,” she says. “It just came so easily, and we were having so much fun. And only when we were chatting afterwards did I suddenly realise why: I’d just made five films in a row, and this was the first one where I had a scene with another woman.”

“I just felt so embarrassed that I hadn’t realised that earlier. Women talking together – apparently it is a reality! Who knew? And while we talk about the lack of female leads in films today, male domination is just as strong in supporting roles.”

[On Feminism] “where I grew up, it’s a word of equality for men and women, not something to question”

“Gerda or Ava or Vera are all strong characters in different ways. I don’t think so much about whether I’m playing a strong person or not – it’s not that the character needs to be loud or straightforward,” she elaborates. “It can be a fragile, flawed person, but if they have enough dimension, and depth that you understand them even at their weakest, that’s a strong character to me. Then you have something to play, and play with. It’s about not being ‘the girl’.”

“There’s a change happening, and I want to be part of that,” she says. “I’m so new, I’ve only been reading scripts for a few years on the international market, but you see something like The Hunger Games or Insurgent proving that a female role can carry a successful blockbuster, and that means something. You begin to feel their effect. When people in the industry and in the media are acknowledging the issue and talking about it, then you begin to look around and realise what needs to be done.”

“I like mystery,” she continues. “I like not knowing about my favourite actresses and actors. I love seeing Meryl Streep up there and knowing so little about who she is outside of what she’s playing on screen. But I meet journalists and even young girls who say, ‘Oh, we just want to know more about you.’ I guess it’s become another a character, a role in a way, for actors to play – this version of themselves to present to them. But it is a made-up idea of who you are.”

The original article can be found here.