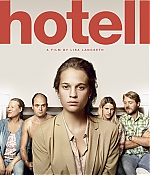 Erika has it all: a good job, lots of friends and a secure relationship. Until the day it all falls apart. Suddenly this perfect life means nothing, and the feelings she once was able to control are no longer within reach. She starts going to group therapy and meets other people suffering from various forms of trauma. One day Erika and this eclectic group of four people decide to take matters into their own hands and heads off together in search of a way out. They start checking into hotels - a place of complete anonymity where one can wake up as a different person.

It Must Have Been Love
Lyrics & Music: Per Gessle
Performed by Roxette
(c) Jimmy Fun Music
Courtesy of Emi Music