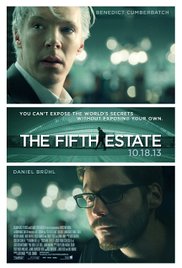 A dramatic thriller based on real events that reveals the quest to expose the deceptions and corruptions of power that turned an Internet upstart into the 21st century's most fiercely debated organization.

The story opens in 2010, with the release of the Afghan War Logs. It then flashes back to 2007, where journalist Daniel Domscheit-Berg meets Australian computer hacker Julian Assange for the first time, at the Chaos Communication Congress in Berlin. Daniel’s interest in online activism has led him to Assange, with whom he has corresponded by email. They begin working together on WikiLeaks, a website devoted to releasing information being withheld from the public while retaining anonymity for its sources. Their first major target is a private Swiss bank, Julius Baer, whose Cayman Islands branch has been engaged in illegal activities. Despite Baer’s filing of a lawsuit and obtaining an injunction, the judge dissolves the injunction, allowing Julian and Daniel to reclaim the domain name. As their confidence increases, the two push forward in publishing information over the next three years, including secrets on Scientology, revealing Sarah Palin’s email account, and the membership list of the British National Party.

At first Daniel enjoys changing the world, viewing WikiLeaks as a noble enterprise and Assange as a mentor. However, the relationship between the two becomes strained over time. Daniel loses his job and problems arise in his relationship, particularly concerning the BNP membership leak, which also revealed the addresses of the people involved, and caused several to lose their jobs. Assange openly mocks Daniel’s concerns about these issues, implying his own life has been more troubling. Assange’s abrasive manner and actions, such as abandoning Daniel at his parents’ house after having accepted their dinner invitation, only deepen the strain further. Interspersed throughout the film are flashbacks hinting at Assange’s troubled childhood and involvement in a suspicious cult, and that Assange’s obsession with WikiLeaks has more to do with childhood trauma than wanting to improve the world. Daniel begins to fear that Assange may be closer to a con-man than a mentor. He also notices that Assange constantly gives different stories about why his hair is white. Assange at first tells Daniel that WikiLeaks has hundreds of workers, but Daniel later finds out that Daniel and Assange are the only members. Most importantly to Daniel, Assange frequently claims that protecting sources is the website’s number one goal. However, Daniel begins to suspect that Assange only cares about protecting sources so people will come forward and that Assange does not actually care who gets hurt by the website, though Assange claims that the harm the website may cause is outweighed by good the leaks create. Daniel’s girlfriend tells him that she believes in his cause, but that it’s his job to prevent Assange from going too far.

The tensions come to a head when Bradley Manning (later known as Chelsea Manning) leaks hundreds of thousands of documents to WikiLeaks, including a video of an airstrike in Baghdad, the Afghan and Iraq War Logs, and 250,000 US Diplomatic Cables. Assange wants to leak the documents immediately, but Daniel insists that they review the documents first. Later, several major newspapers agree to cooperate with WikiLeaks in releasing the documents while spinning WikiLeaks positively. However, both Daniel and the newspapers require the names in the documents be redacted both to protect sources and to assist in the media spin, to which Assange reluctantly agrees. Daniel realizes that Assange has no intention of following through on this promise and is grooming a right-hand man to replace Daniel. The newspapers release the redacted documents. The resulting media and public uproar forces informants to flee from their countries of residence and many U.S. diplomats to resign. Before Assange can go further, however, Daniel and the other members of the original WikiLeaks team delete the site and block Assange’s access to the server.

Daniel later talks with a reporter from The Guardian, and the two fear that giving Assange such a large platform was a mistake. The reporter tells Daniel that while Assange may be untrustworthy, he had done a good thing by uncovering secret dealing in the government and business world and attempting to protect sources. Daniel also reveals the real reason for Assange’s hair colour—that it had been a custom of the cult he had been part of in Australia—and reports that he once accidentally discovered Assange dyeing it that colour.

As the film ends, it is revealed that WikiLeaks is continuing to leak information (with Assange implied to have either regained the site or rebuilt it), and the Manning documents were released with no redactions. Daniel has written a book on his involvement with the organization on which this film was based, and Assange has threatened to sue in retaliation. Assange is shown to be living in the Ecuadorian embassy in London to avoid arrest on an outstanding warrant for alleged sex crimes. In an interview, he denounces the two upcoming WikiLeaks films, stating that they will be factually inaccurate (having been partly based on Daniel’s book). He informs the viewer that individuals are what the government is afraid of and claims that hiring Daniel was the one mistake he made. (Wikipedia)

The Fifth Estate received mixed reviews from film critics, although Cumberbatch’s performance as Assange received praise. On the review aggregate website Rotten Tomatoes the film has an approval rating of 37%, based on 163 reviews, with an average rating of 5.4/10. The site’s consensus reads, “Heavy on detail and melodrama but missing the spark from its remarkable real-life inspiration, The Fifth Estate mostly serves as a middling showcase for Benedict Cumberbatch’s remarkable talent.” On Metacritic, which assigns a normalized rating based on reviews, the film has a score of 49 out of 100, based on 42 critics, indicating “mixed to average reviews”.[59] It received an average grade of “B” from market-research firm CinemaScore.

Variety wrote “that it primarily hobbles itself by trying to cram in more context-needy material than any single drama should have to bear.”[61] The Hollywood Reporter compared the film unfavorably to The Social Network, adding that “Though it will attract attention at the box office, it is unlikely to appeal broadly to moviegoers who, one suspects, have never been as worked up about WikiLeaks as journalists and governments are.”[62] Tim Robey of The Daily Telegraph reciprocated the comparison, elaborating that, “At times, this debt is so obvious that the movie’s style feels second-hand: an overeager, slightly shop-worn bombardment of finger-on-the-pulse pop-out graphics, representing the giddy proliferation of voices in the misinformation age by simply filling the screen with text.” Alan Scherstuhl of The Village Voice criticized the film for hewing “so closely to template that it’s easy to imagine that paperclip from Microsoft Word popping up on Condon’s desktop one day to say, ‘It looks like you’re directing a techno-thriller. Would you like help?'”

Owen Gleiberman of Entertainment Weekly praised the film, describing it as “a vintage journalism thriller, a nihilistic newspaper drama for the dark digital age.”[65] Peter Bradshaw of The Guardian gave a positive review, noting that the film “sticks to the ancient movie tradition of depicting journalists as untamed, quasi-bohemian wild men, showing up late, gruff and unshaven in the office.” Mark Kermode’s reaction was mixed, praising the film’s cast and cinematography, but disliking the direction, writing that “The Fifth Estate feels strangely unfocused, uncertain of how to deal with its slippery enigma.” Rolling Stone’s Peter Travers enjoyed the dynamic between Cumberbatch and Brühl, but disliked the focus of the film’s subplot. Alan Rusbridger, who worked closely with Assange and is portrayed by Peter Capaldi in the film, describes Cumberbatch as “stunning as Assange. The voice and the slightly jerky, stiff, awkward demeanour are just right.” (Source)

The Fifth Estate grossed $3.3 million in North America and $5.3 million in other territories for a worldwide total of $8.6 million, against a budget of $28 million.

In its opening weekend, the film came in eighth place with $1.7 million, one of the lowest openings for a DreamWorks release and the worst 2013 debut for a wide release in the United States. The film was a box office bomb in the United States, though according to Walt Disney Studios Motion Pictures distribution chief Dave Hollis, the film performed best in major North American cities.