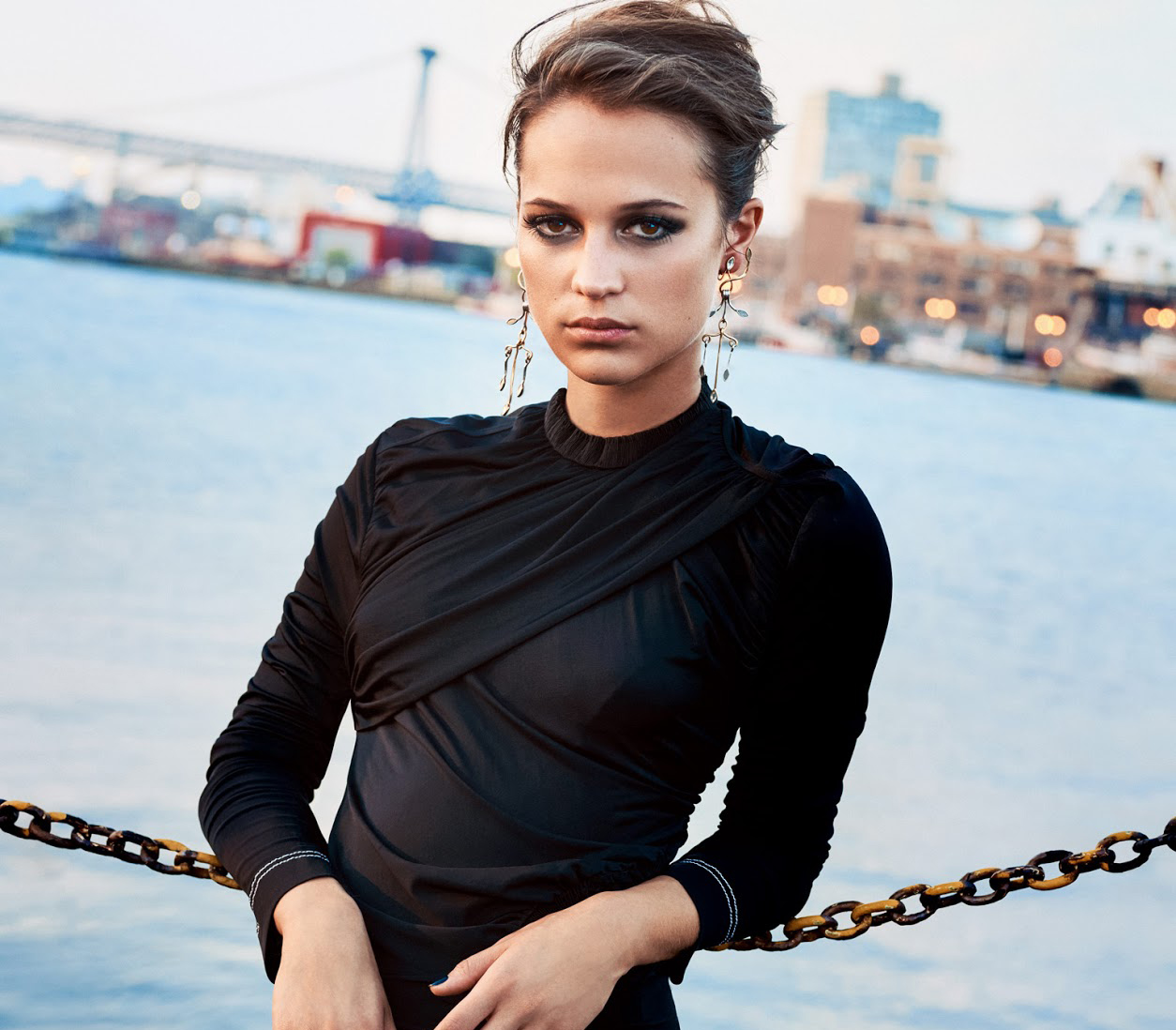 Our girl continues to be a desired cover girl for magazines, and is currently covering the Winter 2016 issue of Porter Magazine! She was photographed by Ryan McGinley, in a photoshoot styled very differently from what she has done in the past. The spread is getting both praise and critique by fashion lovers, and while it might not be my personal favorite Alicia cover either, she looks so amazing in the photoshoot! It’s a must check-out; enjoy the pretty!

We hope to have hiqh quality scans with time, but for now, make sure to purchase your very own copy of the magazine! You can buy it online at this page.

Alicia to Porter:
On her relationship with Michael Fassbender and working with him on The Light Between Oceans: “We’ve never hidden the fact that we’re a couple… He’s extremely hardworking. He was like, ‘Give me something new! I just need a new idea. I need to do it differently.’ I just thought that was cool. Because that was what I was trying to do, too. To push each other and come up with new ideas each time.”

On the Brexit vote: “I couldn’t believe my eyes. I am European. I grew up in a small country. Without it, I would not be where I am right now in my career – I wouldn’t have been able to live with my three girlfriends in London. As a foreigner, I probably wouldn’t have been cast in Anna Karenina if they’d had to pay for a working visa. I hope here in America that it opens people’s eyes that you can’t just let things happen. You need to get involved.”

On working with women: “I can count on my hands the scenes I’ve done with women.” [She recalls acting in a scene with Holliday Grainger for the upcoming Tulip Fever.] “At the end, I was like, ‘That was fun.’ And then I kind of looked up at her and we talked about it. ‘Something’s different. What is it?’ And I realized that I hadn’t had a proper two-page scene with another woman, just playing off each other.”

Sunday Style Magazine: How the Jason Bourne actress is taking Hollywood by storm

Alicia was featured in yesterday’s issue of Sunday Style Magazine, in which she talks about her beginner’s luck in Las Vegas, Jason Bourne and much more. Some beautiful outtakes have been added to our gallery, along with a stunning HQ digital version of the cover. We hope to have scans from her full feature up soon.

You can read her interview below – and I strongly suggest you do, as it’s a great interview. Alicia really is a breath of fresh air in Hollywood, and I am so proud of her for everything she has accomplished so far!

(Source)Alicia Vikander: How the Jason Bourne actress is taking Hollywood by storm
“I had beginner’s luck,” smiles Alicia Vikander. She’s talking about a night out with Matt Damon in Las Vegas, a town where luck can give — and luck can take away.

“Buy the ticket, take the ride,” preached Sin City’s glorifier, Hunter S.Thompson, and Vikander, like everyone else, did — albeit on the studio’s dime.

“We get per diems [daily payments from the production company] and it felt like Monopoly money. So I put $100 down and then I was like, ‘Oh sh*t.’ But I won two nights out of four. I should have stopped, of course.”

How much did you win? “I won 22 times my money,” she laughs. “But it was pure luck and no intelligence, really.”

The Vikander I meet on a crisp, bright winter’s day in Sydney is no beginner.

She is a slight, smiling woman curled cosily into a sofa — a striking contrast to the stern-faced, sharp-edged CIA operative she plays in Jason Bourne, the latest instalment of the Matt Damon juggernaut.

Casual in charcoal Acne Studios jeans and a grey Rag & Bone knit, Vikander, 27, looks relaxed, nursing a cup of lemon and ginger tea and kicking off her shoes as she snuggles cross-legged into the corner of the couch.

The first thing she does is compliment my very low-tech notebook and pen: “Most people bring all these iPads and phones and I don’t know what.”

Ironically, however, it’s among such an array of technology that her latest character is most at home.
END_OF_DOCUMENT_TOKEN_TO_BE_REPLACED