We finally have some news, Alicia fans! Deadline just announced that she has been brought on as a narrator for the documentary ‘Anthropocene: The Human Epoch‘, which will premiere at the Toronto International Film Festival this week. They also revealed that Alicia has completed the filming of her upcoming thriller ‘The Earthquake Bird‘! Stay tuned for more news on both projects.

DEADLINE EXCLUSIVE: Tomb Raider and The Danish Girl star Alicia Vikander has lent her voice to big-canvas documentary Anthropocene: The Human Epoch, which will get its world premiere this week at the Toronto Film Festival.

The science-themed doc, from filmmakers Jennifer Baichwal and Nicholas de Pencier and photographer Edward Burtynsky, contends that human impact on the planet means we have entered a new geological era.

The Toronto-based trio travelled to six of seven continents and 20 countries (the project was entirely carbon offset), documenting evidence of human domination, from concrete seawalls that cover 60% of China’s mainland coast to potash mines in Russia’s Ural Mountains, and marble quarries in Italy to surreal phosphate tailings ponds in Florida.

The film is in English, Russian, Italian, German, Mandarin and Cantonese with English subtitles. Pic is being released in Canada by Mongrel Media. Seville International is handling international sales.

“Alicia’s exceptional voice, and her considerable talent in knowing how to use it, has elevated our film enormously and brings a beauty and hope to the narration that is crucial. We are deeply honored by her participation,” Baichwal said.

The film is part of The Anthropocene Project, which also includes exhibitions, VR and books. It is the third in a trilogy of films that also include Manufactured Landscapes and Watermark.

Hello Alicia fans! We finally have some new content to share with you. Yesterday morning (June 3rd), Alicia was photographed filming “The Earthquake Bird” in Tokyo (Japan) for the very first time! This is our first look at Alicia in the upcoming film, and while these pictures don’t give us much information about the film or her character, she looks incredible. I hope you’ll enjoy the new photos, and stay tuned for any updates related to this project in the future. I hope to have much more film content to share with you soon!

Small side note: “Tomb Raider” is now out on Digital HD (see our previous post)! It will be out in 4K on June 12, and since I want us to have the best possible screen captures from this film, I will wait for that version to come out. Make sure to return next week for those… 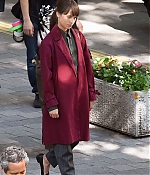 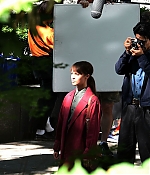 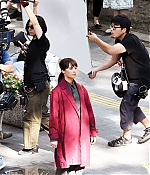 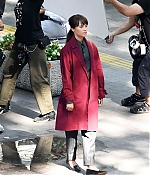 Alicia Vikander And Riley Keough Starring In The Earthquake Bird

Empire — As part of its continued campaign to release 500,000 movies a year (or maybe more like 70), Netflix is setting up deals with companies such as Ridley Scott’s Scott Free. One such team-up will spawn The Earthquake Bird, with Alicia Vikander and Riley Keough on to star.

Still Alice’s Wash Westmoreland has written the script and will direct the film, adapting Susanna Jones’ award-winning novel. Set in Tokyo, The Earthquake Bird promises to be a female-fronted noir thriller following an expat who is suspected of murder when her friend goes missing while both are in the midst of a passionate love triangle with a local photographer.

The film was originally set up at Amazon, but has lingered in limbo, and now Netflix has nabbed it, aiming for Westmoreland to start shooting this May in Tokyo and on Sado Island.

Vikander is on our screens now in Tomb Raider and will next be seen in Submergence, due on 18 May. Keough appears in Under The Silver Lake, which is headed to US cinemas on 22 June, with a UK release yet to be locked in.