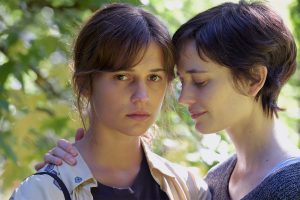 PLAYLIST – The consistently busy actress Alicia Vikander doesn’t seem to know the word “vacation,” and recently she added the role producer to her resumé, putting her talent behind the upcoming project “Euphoria.” Well, production has started on that picture, and the first image has arrived, and based on those involved, it already has us excited.

Co-starring Eva Green, Charles Dance, Adrian Lester, and Mark Stanley, and directed by Lisa Langseth (who previously directed Vikander in “Hotel” and “Pure“), the English language film tells the story of Ines and Emilie, two sisters meeting up again after many years apart and the profound journey that they undertake together. Simple enough premise, and anything that gives Vikander and Green a chance to shine together gets our vote.

Filming is currently taking place in Bavaria, with the production to also shoot in Munich, “Euphoria” will definitely be one we’ll be keeping an eye out for on the festival circuit in 2017.

Alicia and Michael Fassbender for the Los Angeles Times