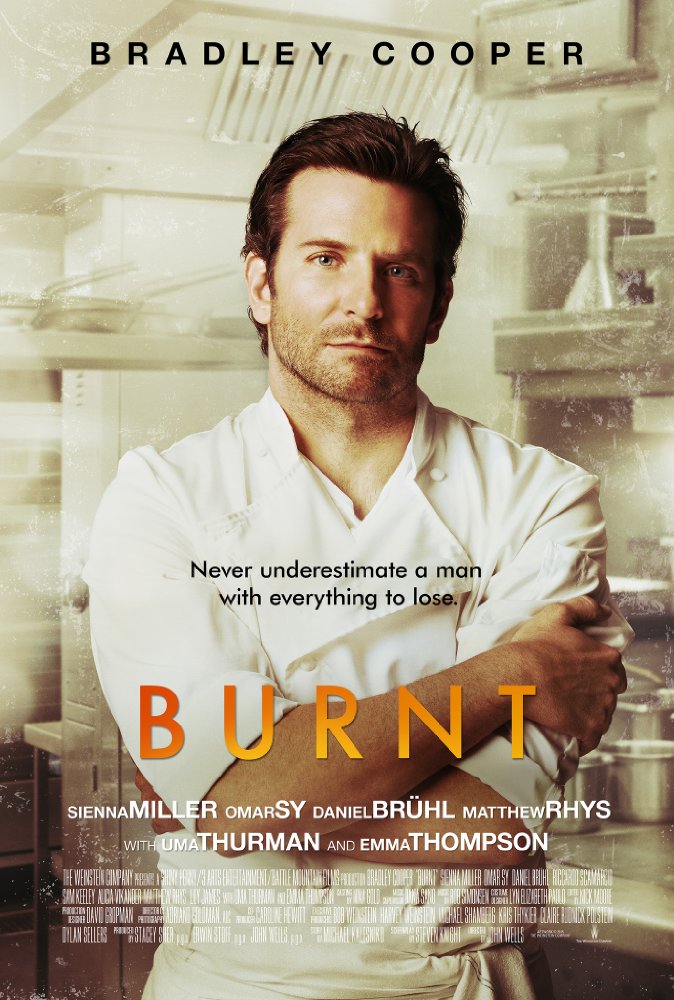 Adam Jones (Bradley Cooper) is a chef who destroyed his career with drugs and diva behavior. He cleans up and returns to London, determined to redeem himself by spearheading a top restaurant that can gain three Michelin stars.

Three years ago, Adam Jones (Bradley Cooper) worked at one of the premier restaurants in Paris, France|Paris, which his mentor Jean-Luc owned. His drug use and manic drive for perfection caused him to implode, taking the restaurant and a number of his friends careers with him. Adam disappeared, sobered up, and sentenced himself to shucking one million oysters at a bar in New Orleans. When Adam finishes shucking his millionth oyster he returns to London with a plan to regain his former glory and go for his third Michelin star. After arriving in London, Adam begins to look up his old colleagues. Jean-Lucs former maître d’hôtel Tony (Daniel Brühl) now manages his fathers hotel. Adam wants to take over the hotels restaurant, but Tony doesnt trust him after his behavior in Paris. Frankly, he thought Adam had died, especially because he didnt show up for Jean-Lucs funeral. Adam had no idea Jean Luc died and feels deep remorse for how he hurt his mentor. Next Adam visits his friend Conti (Henry Goodman) at the restaurant Conti owns. He takes a liking to Contis sous-chef Helene (Sienna Miller), but Helene finds him old-fashioned and unbearably conceited. Adam locates Michel (Omar Sy), another of his friends from Jean-Lucs. When Michel opened his own restaurant Adam felt deeply betrayed. He released rats in Michels kitchen and reported him to a health inspector, which lead to the closure of the restaurant. Michel forgives Adam and agrees to work for him. Adam pays a visit to Reeces, a cutting edge eatery run by Reece (Matthew Rhys), with whom he has a long standing competition. Reece does not forgive him. Adam also plans to employ another Jean-Luc protege, Max (Riccardo Scamarcio), after he is released from prison. Unfortunately, Adams reappearance in Europe attracts the attention of his former drug dealer. Eventually, Tony kicks Adam out of his familys hotel, where hed been staying, so Adam seeks out chef-on-the-rise David (Sam Keeley). David agrees to work at Adam’s restaurant and let Adam stay in his apartment.

Adam contacts famed restaurant critic Simone (Uma Thurman) and asks her to dine at Tony’s hotel. Tony flips out when he sees Simone. Adam appears in the kitchen and asks Tony for the opportunity to prove himself. Tony, having no other option, agrees. Simones review of Adams food is favorable enough that Tony and his father agree to renovate their hotels kitchen and hire Adam as the head chef. They do require Adam to submit to weekly drug tests with Tonys psychiatrist Dr. Rosshilde (Emma Thompson). Adam refuses her offer to see her privately. He throws himself into preparing for his restaurant Langhams grand opening. Max gets out of prison and joins Adams team. Helene rebuffs further job offers until Conti gently fires her. He sends her to the hotels kitchen, where Helene tears into Adam for getting her fired. Adam offers her a much higher salary and she agrees to work at Langhams. The opening night turns into such a disaster that Adam closes the restaurant early. He becomes furious with everyone, especially Helene. After humiliating her in front of her colleagues and becoming physically aggressive with her, Helene quits.

Adam goes on talk shows to generate interest in the restaurant. He manages to bring another famous restaurant critic to eat at Langhams. The critics favorable review cements Langhams as one of Londons new go-to eateries and drives Reece into a frothing rage. Tony visits Helene to convince her to return to Langhams. He offers her more money and some insight on Adams behavior: he grew up in an unhappy home and has always been volatile but brilliant. Helene agrees and Adam treats her with more respect. Their relationship continues to improve when Adam bakes a cake for Helenes daughter Lily (Lexie Benbow-Hart) on her birthday. Adam does not give Helene the day off, so Tony offers to watch her at the hotel, and Adam makes an effort to connect with Lily.

Once Langhams has established itself, Tony and Adam prepare to earn a Michelin star. Adam continues to fend off his drug dealers collectors and to see Dr. Rosshilde for drug tests. He remains impervious to her judgments about his sobriety and his perfectionism but, when asked, admits he knows Tony is in love with him.

When Adam receives an invitation to the reopening of Reeces restaurant, he asks Helene to accompany him. Adam and Reece manage to be civil, but the night derails when Adam spots Jean-Lucs daughter Anne Marie (Alicia Vikander). Reece explains to Helene that they used to date. Adams surprised when Anne Marie treats him kindly, especially since he abandoned her three years ago and didnt attend her fathers funeral. Anne Marie has also gotten clean and sober and wants to give Adam her fathers cooking knives. Helene finds him at a fish market next morning. Adam has wandered around the whole night thinking about what went wrong in Paris. Jean-Luc was more of a father figure to him than his own dad, and he defined himself by his prowess as a chef. He loved the volatile fast-paced environment of the kitchen and thrived there. Until, he didnt anymore. He took drugs and eventually came unhinged. He now wants to achieve greatness and doesnt know how to handle failure.

Adam and Helene share their first kiss in front of the restaurant that morning. Tony interrupts them, but hes not alone. The drug dealers henchmen have returned, and they want Adam to go with them. He hands the fish to Helene and leaves with them. Tony tells Helene not to worry because Adam can handle himself. That evening, Helene discovers a beaten Adam by the kitchen entrance. Tony and Helene want to take Adam to the hospital, but before they can do much more than clean him up, they learn that two Michelin judges have come to Langhams. Everyone rushes about in a frenzy, and Adam barely holds it together. They finish the judges meals and minutes later, the waiter returns with two uneaten meals. The judges sent their food back because their soup was too spicy. Michel, who previously assured Adam that hed checked the soup, admits he poured too much cayenne into the soup. He has had his revenge for what Adam did to him in Paris. After Michel leaves, Adam falls apart and, despite Tonys and Helenes protests, also runs out.

Adam wanders around London. He climbs onto the railing of Westminster Bridge and seems to consider jumping. Later he shows up at Reeces restaurant and bangs on the windows until Reece lets him in. Adam is drunk and makes a nuisance of himself in the kitchen. When he pulls a small plastic bag over his head and begins weeping, Reece dismisses his kitchen staff and rips the bag off Adams head. He cradles Adam when he falls to the floor, and he allows Adam to spend the night. The next morning, Reece says that he knows Adams a better cook than him. He still appreciates Adams work though because it pushes him to keep experimenting. They part on far better terms. Adam visits Dr. Rosshilde and attends his first group therapy session. When he returns to the hotel, he learns that Anne Marie has paid off the drug dealer. She also gives him her fathers knives and urges him to be good to Helene. Tony and Helene find Adam with amazing news: the two men the night before were not Michelin judges, although they behaved exactly like them. Adam is thrilled to have another chance to get a Michelin star, but hes even happier to kiss Helene again. They begin to date.

Adam changes the way he runs the kitchen. He listens to Helene and Max more, and hes more supportive of David. When the real Michelin judges come to Langhams, he works with the other chefs, especially Helene, to serve a superb meal. They receive their third star, and Tony and Adam celebrate.

Tony: My advice to you, Chef, if you want to live a long life, eat your own tongue.

Adam Jones: If it’s not perfect, you throw it away… regardless of time.

Adam Jones: I don’t want my resturant to be a place where people sit and eat. I want people to sit at that table and be sick with longing.

Adam Jones: I sentenced myself to shuck 1 million oysters. Today is the last day of my penance.

Reece: You’re better than me. But the rest of us need you to lead us to places we wouldn’t otherwise go.

[last lines]
Adam Jones: [sitting down to eat with an exhausted but contented staff] Thanks.

The film opened on October 30, 2015, alongside Our Brand Is Crisis and Scouts Guide to the Zombie Apocalypse. In its opening weekend, the film was projected to gross $7–9 million from 3,003 theaters. However, it only ended up grossing $5 million, finishing sixth at the box office, and marking the second straight under-performing opener for Cooper, following Aloha ($9.7 million opening against its $37 million budget).

Burnt received negative reviews from critics, who praised Cooper’s performance but derided the script and storytelling. On Rotten Tomatoes, the film holds a rating of 29%, based on 116 reviews, with an average rating of 4.9/10. The site’s critical consensus reads, “Burnt offers a few spoonfuls of compelling culinary drama, but they’re lost in a watery goulash dominated by an unsavory main character and overdone clichés.” On Metacritic, the film has a score of 42 out of 100, based on 28 critics, indicating “mixed or average reviews”. On CinemaScore, audiences gave the film an average grade of “B–” on an A+ to F scale.

On October 28, Alicia attended the ‘Burnt’ After Party in London, following the premiere she did not attend.