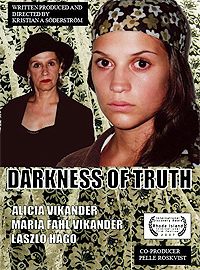 (Original title: Sanningens Mörker) Sandra, a young female student, rents a room from Anna-Lisa - a middle aged actress and former ballet dancer in Berlin. One day Sandra reads her landlady's diary where she expresses outright hatred towards her tenant. As their relationship has appeared good and friendly, Sandra's existence is shattered. Anna Lisa is a has-been, who claims to work at the theatre but instead steals from her wealthy acquaintances and gets drunk at the local pub. She struggles to maintain an illusion of her former star status. After failed attempts to confront Anna-Lisa Sandra decides to confront by writing a message in the diary.

DARKNESS OF TRUTH clip 1 from Kristian A. Söderström on Vimeo.