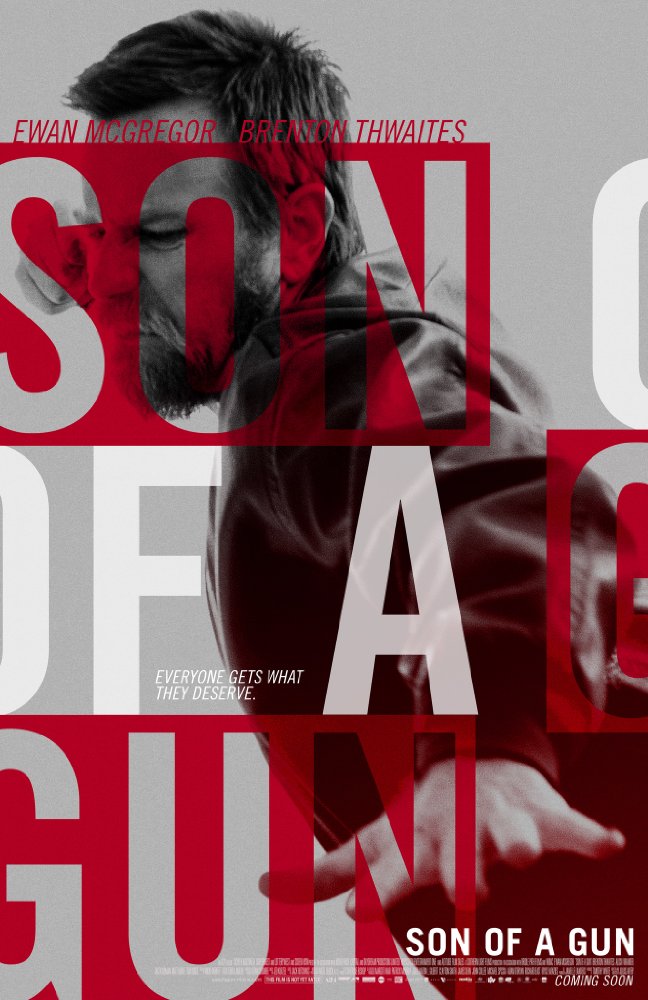 Son of a Gun

Locked up for a minor crime, 19 year old JR quickly learns the harsh realities of prison life. Protection, if you can get it, is paramount. JR soon finds himself under the watchful eye of Australia's most notorious criminal, Brendan Lynch. But protection comes at a price. Lynch and his crew have plans for their young protegee. Upon release, JR must help secure Lynch's freedom, staging a daring prison break. As a reward, he's invited to join the crew as they plan a gold heist that promises to deliver millions. However, as things start to go wrong, a deadly game of cat and mouse ensues. JR finds himself unsure of whom he can trust and on a collision course with his former mentor.

A 19-year-old youth, JR (Brenton Thwaites) is sent to an Australian correctional facility for six months as punishment for a minor crime. During his first few days at the prison, he finds his cellmate is being sexually abused by another group of prisoners led by a man named Dave. JR also comes across the charismatic Brendan Lynch (Ewan McGregor), Australia’s public enemy #1 and a notorious armed robber. Lynch is playing a game of correspondence chess when a passing JR points out an unseen checkmate against Lynch, demonstrates the move, and is dismissed. Later, JR finds his cellmate sharpening a shiv with the intention of defending himself against Dave. When Dave and his gang move to attack the cellmate, JR prevents the attack by initiating a fight. Lynch scolds JR for meddling in other people’s affairs, and soon after, JR’s cellmate is once again sexually assaulted. His cellmate attempts to commit suicide and he is hospitalized, causing Dave to focus his sexual attacks on JR. When Dave and his gang try to rape JR, Lynch and his men, Sterlo (Matt Nable) and Merv (Eddie Baroo), rescue JR and kill Dave. In exchange for Lynch’s protection during JR’s sentence, JR agrees to perform tasks for Lynch once he gets out of prison.

Upon release six months later, JR meets crime lord Sam (Jacek Koman), with whom Lynch is playing chess, and his nephew Josh (Tom Budge). JR is given an apartment to live in, as well as a briefcase of Lynch’s personal effects, including fake passports, clothes, and a pistol. Soon afterwards, a pretty young woman named Tasha (Alicia Vikander) arrives at the apartment to give JR some cash and a cellphone, which is used to receive instructions. Following instructions given, JR visits Private Wilson (Damon Herriman) at his trailer and illegally purchases various assault weapons. Upon receiving instructions, JR hijacks a helicopter used for scenic tours, and instructs the pilot, at gunpoint, to fly to the prison Lynch is still being held at. Lynch, Sterlo, and Merv orchestrate an escape by taking one of the prison guards hostage until JR’s helicopter arrives to extract them. Upon landing, the four men leave the helicopter and pilot in a field and drive away in a getaway car. While the car is stopped at a convenience store and Merv is buying food, the other three discover from a radio broadcast that Merv was incarcerated for raping a Perth schoolgirl, which Merv lied about to Lynch and Sterlo. Soon afterwards, Lynch brutally beats Merv and expels him from the crew.

The three head to Sam’s estate, where he recruits Lynch and his men to execute a gold heist at Kalgoorlie, where the expected payout is in the millions. Afterwards, a party occurs at the estate, and JR spots Tasha, who he follows to the poolside. Before long, Josh decides to harass JR and pushes him into the pool. JR, unable to swim, is rescued by Tasha, and the two leave the party to eat at a Chinese restaurant. Here, Tasha reveals her previous relationship with Sam, and how people who run from him are killed.

The next morning, Lynch warns JR to stay focused on the task at hand and not be distracted by Tasha. They then visit the quarry they plan to rob. Lynch tells JR that his role in the heist will be to access the room with the gold and ensure that no quarry employees press the panic button. Lynch then goes and recruits a rally racer named Chris (Nash Edgerton) to be the getaway driver. Back at Sam’s estate, the gang plan the heist, and a fight breaks out between JR and Josh. The fight is broken up and Lynch tells JR to go calm down. JR heads to the bar where he sees Tasha, and scares away some men who are harassing her. Angry with his impulsiveness in scaring away the men, given that she does not have proper immigration papers, Tasha tells JR that he was being stupid, but when JR asks her to coffee, she asks him to meet her in the lake near his house. Later that night, JR sneaks out to meets Tasha and goes skinny dipping with her, and the two have sex in the water.

The next day, the group goes ahead with the heist. The group infiltrates the quarry and inserts JR into the ventilation shaft above the gold room. When the time comes, JR successfully intimidates the gold room employees to not press the panic button, and lets the rest of the crew in. Lynch then takes two employees to pour the melted gold into bars, but it goes against the plan and asks Josh to guard the employees while JR watches the gold pouring. This infuriates Josh, who ends up shooting an employee in the leg. Lynch breaks Josh’s nose with the stock of a shotgun, and returns to watching the gold being poured. Police arrive, and the crew walks into the open disguised as employees, but holding the real employees at gunpoint. Then, Lynch releases the hostages and opens fire on the police vehicles and personnel. Chris arrives with the getaway vehicle, but on their way out, Sterlo is shot through the abdomen and begins bleeding heavily. Chris manages to incapacitate the two chasing police vehicles and escape, but Sterlo dies at the end of the chase, instructing Lynch to give his cut of the heist to his wife.

Sam betrays Lynch, JR, and Tasha, but the three escape safely. The three travel to Melbourne where Sam plans to meet his fence. JR and Lynch sabotage the rendezvous, killing Sam’s henchman and kidnapping Josh in the process. After interrogating Josh, they find the gold stashed in a storage unit.

Lynch and JR kill Sam in his estate. Before JR and Lynch escape for good, Lynch offers him $350,000 to leave. Here it is revealed that when JR realized Lynch would discard him once he had acquired the gold, JR masterminded a plan to steal the gold with Tasha and take half. Lynch has no choice but to accept JR’s terms and wait. Before he receives the gold, however, a woman in a laundromat identifies him as the escaped convict, and Lynch is sent back to jail. Later JR sends Lynch a postcard detailing where the gold has been left for him, and a picture of a pregnant Tasha, hinting at an optimistic future.

JR: Here’s some proof that the bonobos aren’t dying out.

Son of a Gun received mixed reviews from critics and currently has a Rotten Tomatoes score of 63% based on 63 reviews, with its consensus stating: “Gritty, stylish, and smart, Son of a Gun serves up plenty of genre thrills and offers a new change of pace from Ewan McGregor.” On Metacritic, the film has a 48/100 rating based on 18 critics, indicating “mixed or average reviews”.