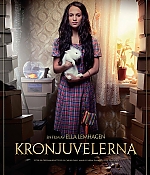 Kronjuvelerna (original title): Fragancia is arrested for the attempted murder of Richard Persson, the son of a powerful factory owner. During the interrogation her amazing and remarkable life story is revealed. We follow her through her impoverished childhood, her adolescence where she meets the great love of her life, ice hockey star Petterson-Jonsson and the lead up to the fatal night where the story begins.