Alicia and Michael have arrived in Paris for Fashion Week!

Hello Alicia fans! Just a quick event alert. Alicia and her husband Michael have just arrived in France (check out some pics at our twitter below), which means she’ll probably attend the Paris Fashion Week which is currently underway in the capital. The Louis Vuitton show (which is almost certainly the one she’ll be attending) will be held at 8:00 PM local time tomorrow. I will update the site with both photos and videos if available, so make sure you drop by the Alicia Vikander Vault tomorrow evening for full coverage!

Nicolas Ghesquière will present the Louis Vuitton Women’s Spring-Summer 2019 Collection in Paris at the Louvre on Tuesday, October 2nd at 8pm Paris Time.

📸 NEW: Alicia and Michael Fassbender arrive at their hotel in France for the Paris Fashion Week! #AliciaVikander #ParisFashionWeek #MichaelFassbender pic.twitter.com/GUWs14a7SA

As mentioned earlier, Alicia is a guest at The Tonight Show Starring Jimmy Fallon tonight! We now have the very first stills from the show, Alicia looks so beautiful in a creme dress. We’ll have videos and screen captures up once available, but make sure to tune in tonight… 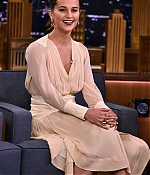 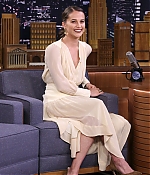 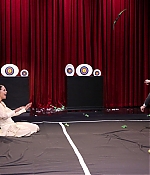 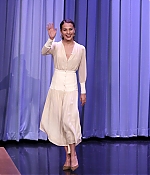 This Tuesday , March 13, Danilo Gentili talks to the international actress Alicia Vikander , who will be the interpreter of the new Lara Croft in “Tomb Raider – The Origin”. She reveals that it took three to four months to gain the muscles, but only three weeks to lose them: “ I did climbing, cycling, various training.” And she also tells what she ate during the preparation: ” It’s a pot of rice five times a day. You only eat good carbohydrates, not bad ones. ” Winner of the Oscar for Best Supporting Actress in 2016 for “Danish Girl”, she says she does not keep the statue with her: “I do not have mine with me, I have not seen it since the ceremony. The daughter of a friend of mine is taking care of my Oscar . ”

Hello Alicia fans! Alicia will be back in the States next week, and is lined up for several talk show appearances to promote Tomb Raider ahead of the US premiere. Stay tuned for full coverage from all here at the site! We’ll have photos, videos and more from each of the appearances. Make sure to follow us on twitter for all the latest updates, as well as updates on any other talk shows Alicia might appear on next week! It’ll be a busy couple of weeks for Alicia, and we’ll keep you updated on everything she’s up to.

Thanks to our good friends over at Eva Green Web, we now have a new poster + the first full official trailer for Alicia’s film Euphoria! The film is set to have its Nordic premiere in competition at Goteborg Film Festival on January 27, 2018. Alicia has been confirmed to attend the festival, as she will receive the 2018 Nordic Honorary Dragon Award for her life’s work! The festival’s full programme will be released on January 9 and ticket sales will start on January 11. You can check out their official website here.

The film will premiere in regular cinemas on February 2nd in Sweden, February 11th in Russia, February 16th in Norway and April 5th in Germany. No other premieres have been announced yet, but we’ll keep you posted!

Alicia to present at the 2018 Golden Globes!

Great news, Alicia fans! We’ll get the first Alicia appearance of the year next week already, with her set to attend the 75th Annual Golden Globes to present one of the awards. The awards are telecast live January 7 on NBC, and we’ll hopefully have many photos of Alicia at the red carpets ahead of the show! Stay tuned for full coverage here at the Alicia Vikander Vault.

The three-hour ceremony at the Beverly Hilton will be hosted by Seth Meyers and air live on NBC.

Vikander is a two-time Globe nominee, most recently for 2015’s “The Danish Girl,” for which she won a supporting actress Oscar. Burnett has five Globe trophies, the last of which came in 1978 for her work on CBS’ “The Carol Burnett Show.” Taylor-Johnson won the supporting actor motion picture prize this year for his performance in “Nocturnal Animals.”

Alicia on The Late Late Show With James Corden tonight!

Hello Alicia fans! Just dropping by to alert you all that our girl will be a guest at The Late Late Show With James Corden tonight. Make sure to tune in! We’ll have full coverage up for you tomorrow.