Jason Bourne was released on digital HD earlier this week. I was able to get my own copy and have made blu-ray quality screen captures from the film, in which Alicia appears as Heather Lee. Make sure to check out the movie on itunes and amazon, as the movie will be available on blu-ray and DVD on November 28th. 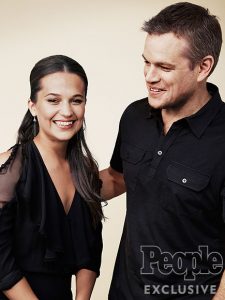 PEOPLE – After multiple buzz worthy roles in major films – including her Oscar win for The Danish Girl, the Swedish star, 27, is one of the most in-demand talents in Hollywood.

“We were lucky to get her,” Matt Damon tells PEOPLE of getting Vikander to sign on for a role in Jason Bourne. “Everyone in Hollywood is trying to get Alicia in their movie right now.”

Damon, 45, praises Vikander’s versatility in films like Danish Girl, Ex Machina and The Man from U.N.C.L.E..

“I just think of these once-in-a-generation actresses who kind of explode onto the scene and what strikes me about her is I can’t see where her limits are,” he says. “There’s been six or seven [recent] performances and they’re all really different and they’re all going in different places and I don’t see the boundaries yet. I’m really excited to see what she does next.”

For much more on Matt Damon and Alicia Vikander, pick up the latest issue of PEOPLE

Damon adds: “You only get better at this job. She’s going to keep working with great people because great people all want to work with her,” he says. “In my experience, I knew a lot when I was 27 but the next 18 years were, it was nothing but fun because I was doing what I loved to do and kind of by osmosis you get better at it because of the people you’re around and working with. I don’t know where she’s going to go but I’m excited to see it.”

Is there anything we should know about Vikander that we don’t already?

“If I knew something that people don’t know, then they shouldn’t hear it from me,” Damon says with a laugh.

Jason Bourne is now in theaters.

Our girl does not rest! The first two gorgeous close-ups of Alicia from the ‘Jason Bourne‘ press conference in Las Vegas (July 19) have now been added to our gallery. She looks stunning! We will have many adds tomorrow.

REMEMBER: Alicia will be on “The Tonight Show starring Jimmy Fallon” tonight!

The ‘Jason Bourne’ promotion is still going on, as we now have been graced with multiple new shots of Alicia! Check those out in our gallery:

Last night, the Las Vegas premiere of ‘Jason Bourne’ was held at the Colosseum at Caesars Palace. I have added a lot of pretty high quality photos to our gallery, and more will be added later! Alicia was once again wearing a custom made outfit by Louis Vuitton, and she looked stunning.

Alicia is currently in Spain, Madrid, for the promotion of ‘Jason Bourne‘, and will be attending the premiere in the capital tonight. But for now, pictures of our girl attending the movie’s photocall have been added to our gallery. Check them out by clicking on the thumbnails below:

Alicia walked the red carpet at the French premiere of ‘Jason Bourne’ in Paris last night, looking beyond stunning in a custom made Louis Vuitton dress. The first 100 HQ photos have been added to ou gallery, but we expect more will be added later! Big thanks to our friends Neide and Steph for helping with some of these.

That’s two sparkly Louis Vuitton dresses in two days now – will we see a third one today? Stay tuned for updates later, as the Madrid premiere of the film is scheduled for tonight!

Alicia at the ‘Jason Bourne’ premiere in Paris: Pre-liminary post!

Alicia and her co-stars continues the “Jason Bourne” promotion tour, and tonight they’re attending the French premiere in Paris! She looks absolutely stunning in a sparkling dress – watch the first video from the red carpet below. Stay tuned for plenty of updates…

Page 1 of 31 2 3 Next »
Welcome Message
Welcome to Alicia Vikander Online, an exclusive and in-depth fansite dedicted to the talented actress Alicia Vikander. Alicia is known for her roles in projects such as "The Danish Girl", "Tomb Raider" and "Ex Machina", and most recently "Earthquake Bird".