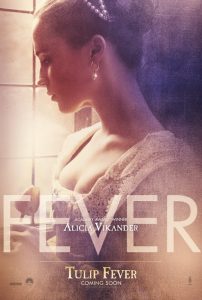 INDIEWIRE – Justin Chadwick’s “Tulip Fever” follows Jan Van Loos (Dane DeHaan), an artist commissioned by the rich Cornelis Sandvoort (Christoph Waltz) to paint the portrait of his young wife Sophia (Alicia Vikander). Set in 17th century Netherlands, the film focuses on the relationship between the passionate Jan and the unhappy Sophia, and their scheme to run away together by investing in the risky but lucrative tulip market to secure their future. Based on the novel by Deborah Moggach, whose novel “These Foolish Things” was adapted into “The Exotic Marigold Hotel,” “Tulip Fever” is a period drama about forbidden love and leaps of faith. […]

Justin Chadwick previously directed “The Other Boleyn Girl,” “The First Grader,” and last year’s biopic “Mandela: Long Walk to Freedom.” The film’s screenplay is written by playwright Tom Stoppard, whose works like “Rosencrantz and Guildenstern Are Dead” and “Arcadia” are widely acclaimed; he also penned screenplays for Terry Gilliam’s “Brazil,” John Madden’s “Shakespeare In Love,” and Joe Wright’s “Anna Karenina.” Alicia Vikander recently received the Oscar for Best Supporting Actress for her performance in “The Danish Girl.” She can also be seen in the upcoming “Jason Bourne” film and Derek Cianfrance’s “The Light Between Oceans” opposite Michael Fassbender. Other cast members include Zach Galifianakis (“Baskets”), Judi Dench (“Chocolat”), Jack O’Connell (“Starred Up”), Holiday Grainger (“The Borgias”), Matthew Morrison (“Glee”), Cara Delevingne (“Paper Towns”), Tom Hollander (“In The Loop”), and more.

“Tulip Fever” will be released in theaters on July 15th.